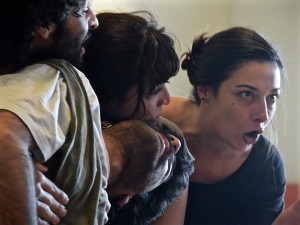 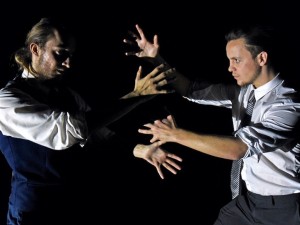 Offering workshops, courses and residencies in key training methodologies, Madeleine is recognized as a master teacher, coach, and highly skilled movement practitioner. She has also developed a specific training pedagogy for performers called Bodyology, believing that the physical arts are vital in maintaining artistic excellence, a reverence for craft and forging ahead into un-discovered territory.

On-going training creates equity among performers, and provides the ritual of daily practice that leads to heightened focus. In depth exploration of ‘whole body practices’ (physical, psychological and experiential) provide the grounding that is vital for not only a performers authentic inner landscape,  but also clarity of external purpose and precision.

Madeleine has taught at the USC School of Theatre, various colleges, schools, and academies in the U.S, Italy, and the U.K.

“The time you spent with us was pivotal in our growth as a theater, we cannot tell you how relevant and powerful your influence has been.”  – The Actors’ Gang Theatre.

An advanced physical theatre training practice adapted from the principles of the LABAN Efforts, Body Weather (from the Butoh) and Viewpoints – It is also influenced by Grotowski and the expressionist vocabulary of european dance theatre, that synthesized unrestrained emotion, radical interactive theatre and body language, to expose the internal world. Bodyology is a pedagogy that unifies rigorous ensemble training, around the idea of movement as ritual – creating a common vocabulary and kinesthetic conversation that leads to vital and integrated physical performance.

Laban Movement and Dynamics for Actors

Grounded in the principles of the eight efforts as a tool for the development of authentic character, natural physical action and energetic momentum. A system for understanding the relationship between movement intention.

Highly physical, rigorous and rhythmic training initially developed by Min Tanaka, evokes sense memory, and re-examines the body itself as a transformative environment.

Devising process that leads to the development of original work. Exploration of themes, identifying essential questions, creating text and movement, building characters and working with stage design and architecture.

Compositional work and performance drawn from extensive interviews, followed by the creation of autobiographical text, monologues and or poetry reflecting these real life experiences. Arts Education

Teaching young adults and pre-professionals the fundamental principles and skills needed to achieve technical and artistic mastery – Drawing upon the multi-disciplinary aspects of the arts, and exposing students to experimental and avant-garde works. “Madeleine has that rare gift, the ability to teach young adults how to be more than performers – how to be artists” Brenda Strong – Stage and Television actress.